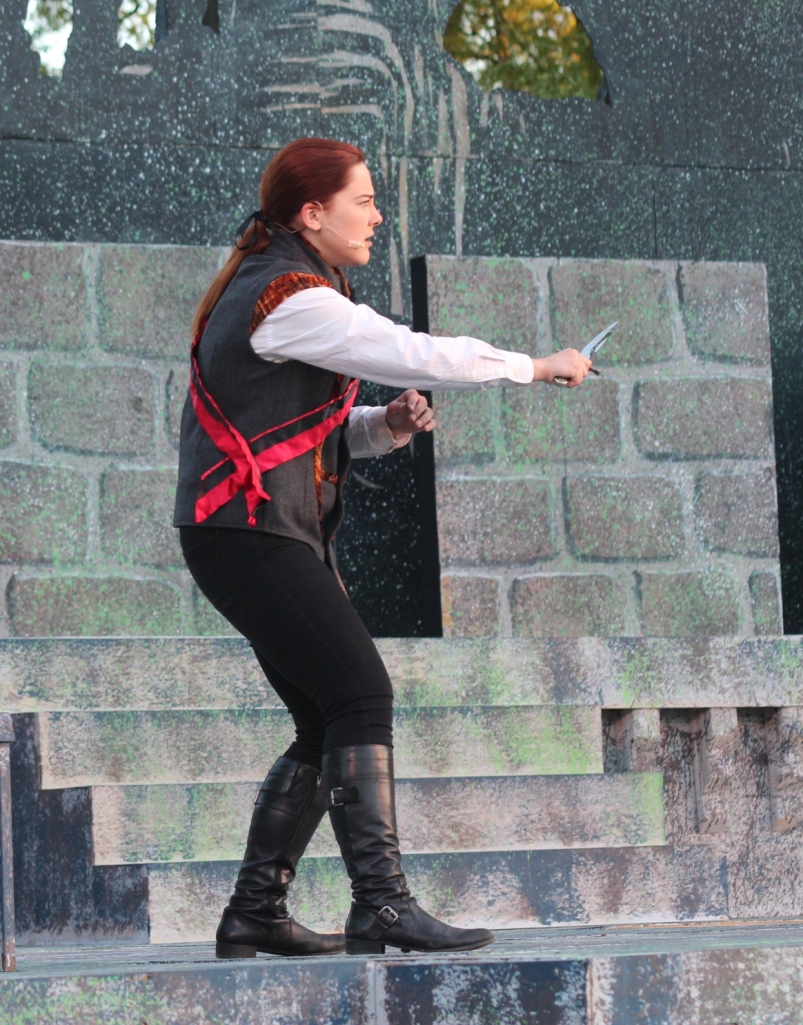 Two of the most memorable theatrical events of 2014 took place in Schiller Park.

The first was Actors’ Theatre’s production of Hamlet. Though it garnered the most attention for its offbeat casting of a teenage girl in the title role, what really set the show apart was its overall quality. Every role—from the Danish prince to the lowly gravedigger—was cast and performed to perfection.

The second event was the May 30 memorial for actor Carl Novak, who died unexpectedly last spring. I first met Carl several years ago when he approached me during intermission at a local show and said some nice things about my reviews—frank but fair, something along that line. I didn’t yet know who he was other than a familiar face at opening nights, but I appreciated the supportive words.

It was only after Carl’s death that I learned he’d said equally supportive things to many people. On Facebook and at the memorial service, people described him as a man who went out of his way to make others feel important and appreciated.

Though I don’t share the strong Christian faith that guided Carl, it’s hard for me to think of him without recalling words from the New Testament: “Go and do likewise.” What a world it would be if we all followed his example.

Back to business: This being the end of the year, it’s time for me to share my list of the best theatrical performances and productions I saw in 2014. Notice the “I saw.” No one has time to see everything, and I almost certainly missed many worthy contenders.

Thanks to everyone who made 2014 a good year to go to the theater.

Best Play: Hamlet, Actors’ Theatre. Co-directors John S. Kuhn and Nick Baldasare coaxed incisive performances from the entire cast, starting with Grace Bolander, the high school senior who gave such a brilliant interpretation of the title prince. Runner-up: How We Got On, Available Light Theatre.

Best New Work: Memory Fragments, MadLab. Sam Wallin’s “cyberpunk” mystery constantly shifted between the present and the past, and between physical and virtual reality, but director Andy Batt handled the changes with aplomb. Runner-up: Gallery of Echoes, Shadowbox Live.

Best Touring Show: The Book of Mormon, Broadway in Columbus. Only a poor sod with maggots in his scrotum could fail to enjoy this raunchy but warmhearted satire.

Worst Trend: musicals with canned accompaniment. CATCO’s production of Dirty Rotten Scoundrels handled the prerecorded soundtrack pretty well, but taped music drained much of the life out of SRO’s The Sound of Music. Besides, musicians need the work!

Best Direction: Hamlet, John S. Kuhn and Nick Baldasare, Actors’ Theatre. Every role was handled with such clarity that even Shakespeare buffs probably gained new appreciation of the venerable tragedy.

Best Performance, Male: Isaac Nippert, My Name Is Asher Lev, CATCO/Gallery Players. As Asher, Nippert expertly navigated a role that required him to narrate his own tale while playing himself at ages ranging from youngster to adult.

Best Performance, Female: Grace Bolander, Hamlet, Actors’ Theatre. Casting a teenage girl as the melancholy Dane might seem like a gimmick, but Bolander gave an impassioned yet witty performance that proved she was simply the best person for the part.

Over the past 25 years, Shadowbox Live has settled into a comfortable role as the troupe that plies viewers with skits, food, booze and rock tunes.

It wasn’t always this way. Back in the early days, Shadowbox head honcho Stev Guyer was determined to create big, important works about big, important topics. The result was a series of original musicals such as 1995’s Evolution.

Like the others, Evolution was loud, flashy and ambitious. Sometimes, particularly in the dance sequences, it was impressive.

More often, though, it came across as a lecture set to music. How could it seem otherwise, when it methodically introduced each topic before discussing it with billboard-style dialogue and lyrics?

Thankfully, the new version has lost more than a portion of its name. It’s also lost the pedantic attitude that made viewers of Evolution feel like they deserved college credit just for sitting through it.

Guyer and his fellow Shadowboxers have learned a lot about showmanship in the past quarter-century, and they’ve funneled it all into Evo.

The new show still addresses some of the same questions about human beings and our relationships with ourselves, each other and society: Why are we so prone to violence? Is “justice” just another word for “revenge”? And, most basically, what is the point of our existence?

Sex, love, parenting and old age also are taken up.

The most obvious change from the previous version is that all of these topics are introduced by the Ringleader, a flawed character energetically portrayed by Stacie Boord. Her presence helps to put a recognizably human face on the proceedings.

Another difference is that the show often makes effective use of humor to get its points across.

Often the humor is of the darker variety, as it is in a segment on parenting and the complications it creates in romantic relationships. When “Mr. Know It All” (Billy DePetro) and “Mrs. Don’t Tell Me What to Think” (Katy Psenicka) are asked which part each wants to play in a knife-throwing act, the latter eagerly grabs a handful of blades. It seems she has a wealth of pointed comments that she’s been dying to aim at her hubby.

As in the original Evolution, music and dance are at the center of the action.

From the first notes of Risking It All, with its ever-changing time signatures, the music is an interesting combination of melodies and intricate rhythms. The heavy percussion often carries echoes of traditional African drumming, reminding us of the continent where human evolution likely has its roots.

The dancing, choreographed by Psenicka, is as varied as the show’s many moods. Though it can be frenetic and exciting, it also can be sensitive and graceful. In a particularly lovely segment, Guyer and Boord sing a song about aging desire while JT Walker III and Nikki Fagin act it out through dance.

Throughout the show, Scott Aldridge’s dramatic lighting is a key component. So are the colorful and flowing costumes (designed by Linda Mullin, Myah Shaffer and Lyn Walker), which help to establish the circus-like atmosphere.

Occasionally, the show still carries a whiff of the classroom. One example is a section that delves into the ancient practice of taking aged tribe members out into the wilderness to die. It seems like a needless digression since society now treats its oldsters a bit more humanely.

But most of the show is entertaining and engrossing, and it’s consistently so after intermission. Even when Evo preaches, as it does in the section titled Revenge, it drains the self-righteousness from the sermon by delivering it with a comedic touch.

Shadowbox clearly has evolved for the better through the years by learning from its past mistakes. If only we could say the same for the rest of humankind.