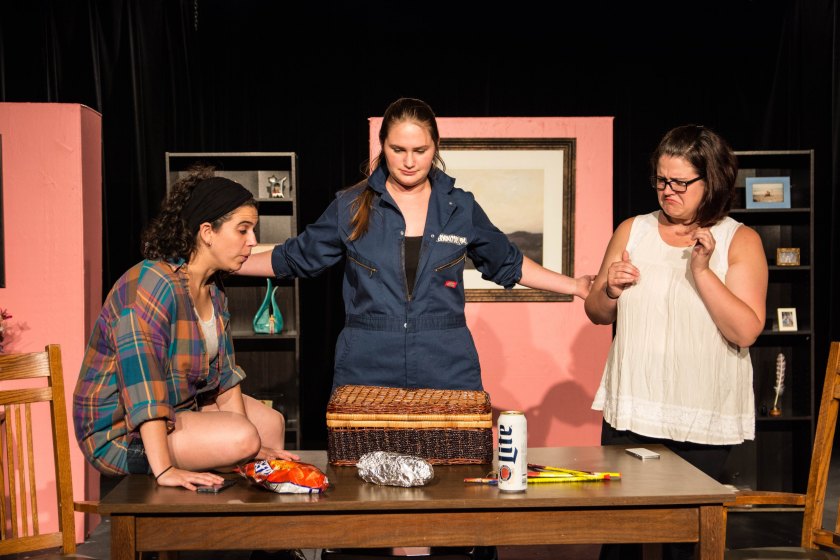 Scritch Scritch is pretty enjoyable, if a bit puzzling.

Christopher Lockheardt’s world-premiere comedy begins as Rebecca (Kyle Jepson) is observing her 32nd birthday. While she and her mom (Mary Sink) celebrate, Rebecca mentions that she’d like to get married and have children, but she has no idea where to find a husband. Oddly, though most mothers with grownup children are eager to become grandmothers, Rebecca’s mom urges her to remain single.

Another puzzling development arises before the little party breaks up: Rebecca begs for stories about her long-lost father, but her mom refuses to talk about him.

The mystery deepens when Rebecca’s friend Daley (Shana Kramer) drops by, and the two hear the scratching sounds that give the show its title. Deciding Rebecca’s home has attracted a mouse, they call in an exterminator (Cat McAlpine), who quickly determines they have a much bigger problem: “You have a man in the house.”

In this world, it seems, men are considered pests who don’t fit in with society because of their dirty, noisy and annoying ways. Therefore, they must be trapped using lures such as beer and remote controls and “poisoned” with multivitamins, nutrition being lethal to their male constitutions.

But wait a minute, you’re probably asking yourself if you’re anything like I was at this stage in the play. Wasn’t Rebecca just saying she wants a husband but doesn’t know where to find one? Why, then, would she want to exterminate the presumably available man who’s taken up residence in her house?

The answer to this is something I didn’t figure out until later, so skip over the rest of this paragraph if you want to remain equally in the dark. Rebecca doesn’t know that husbands are men! Not only that, but she doesn’t know fathers are men, which becomes apparent much later.

The play is easier to understand once you know this, so I’m not sure why playwright Lockheardt wanted to keep it a secret. Or maybe he didn’t mean to but simply failed to make it clear.

At any rate, even if you don’t totally understand the peculiarities of the play’s female-centered society, you’ll catch on that Lockheardt is poking fun at male stereotypes such as their supposed love of drinking beer, eating junk food, playing loud music and generally making a mess. There’s nothing particularly original about these observations, and they don’t completely explain why they’ve made men pariahs. After all, Rebecca’s friend Daley has some of these same tendencies, proving that gender stereotypes don’t always hold true. Still, they’re good for a few chuckles.

Helping to sell the flawed script is a cast that gives punchy performances under Jim Azelvandre’s direction (with assistance from Becky Horseman). Jepson and Sink’s portrayals are enough alike that it’s easy to believe Rebecca and her mom are related. As the eccentric exterminator, McAlpine is humorously deadpan, and Kramer adds loads of energy as the fun-loving, wise-cracking Daley.

Though the play is a comedy, it does have some somber and even touching moments, especially toward the end. These are nicely handled by the cast and augmented by Rob Philpott’s lighting. As with the comic moments, they would be easier to appreciate if the mindset behind the play’s matriarchy were a little less confusing.

So how can a work this flawed be more or less enjoyable? Maybe it has something to do with the play and the production’s laidback nature and lack of pretentiousness. Since they don’t seem to take themselves that seriously, it’s hard to take their missteps all that seriously either.